From the Junk File: How We Made 7 Boats Disappear 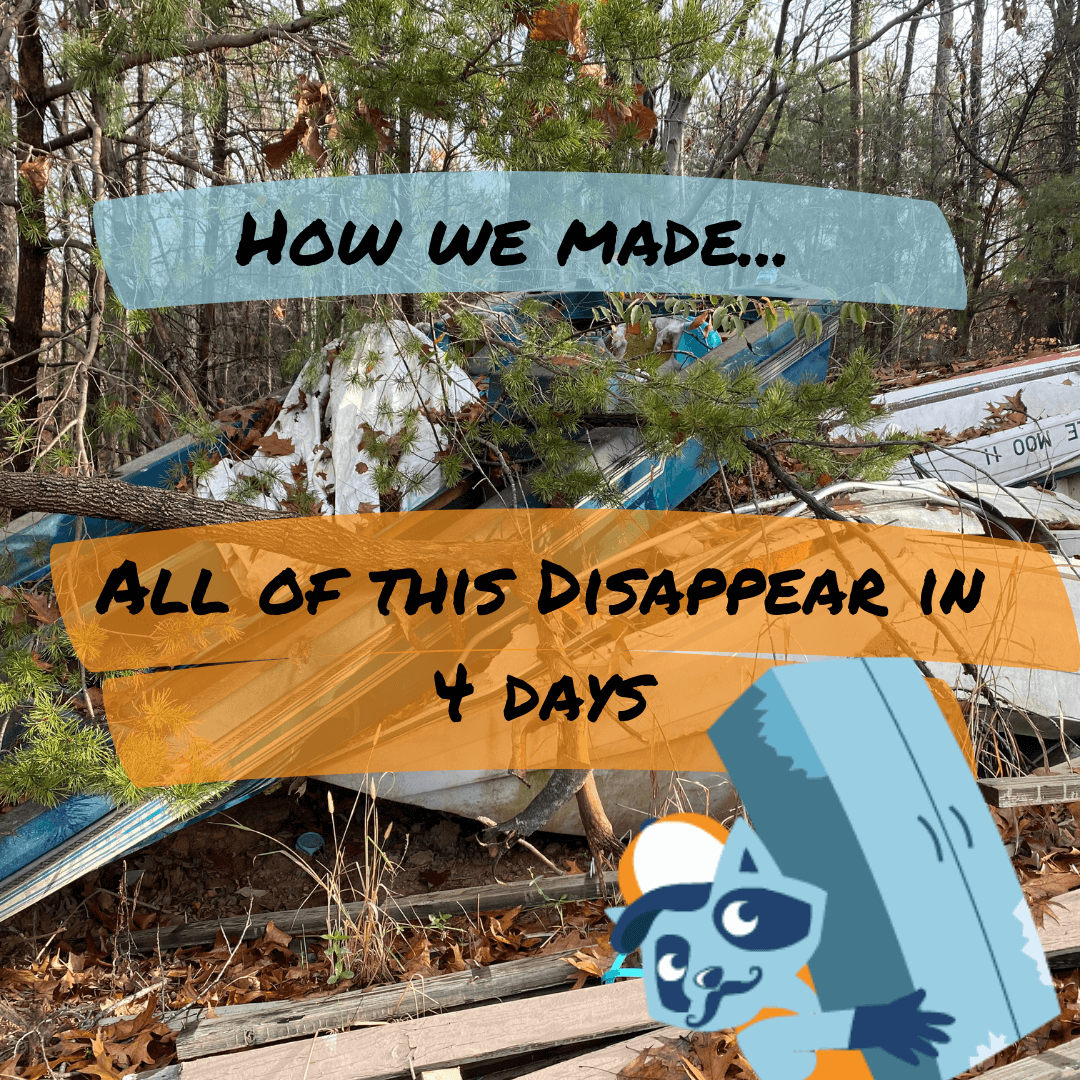 From the Junk Files: Sail Away

The time a property manager called us to haul away 7+ junk boats.

We got a call from a property management company in Tega Cay/ Lake Wylie. Their client purchased a self- storage complex and needed a cleanout. Rents were low and the property was in disrepair. Improvements were necessary before rental rates could be raised. Junk removal was the fastest and most powerful way to demonstrate meaningful improvement.

They had a lot of junk. 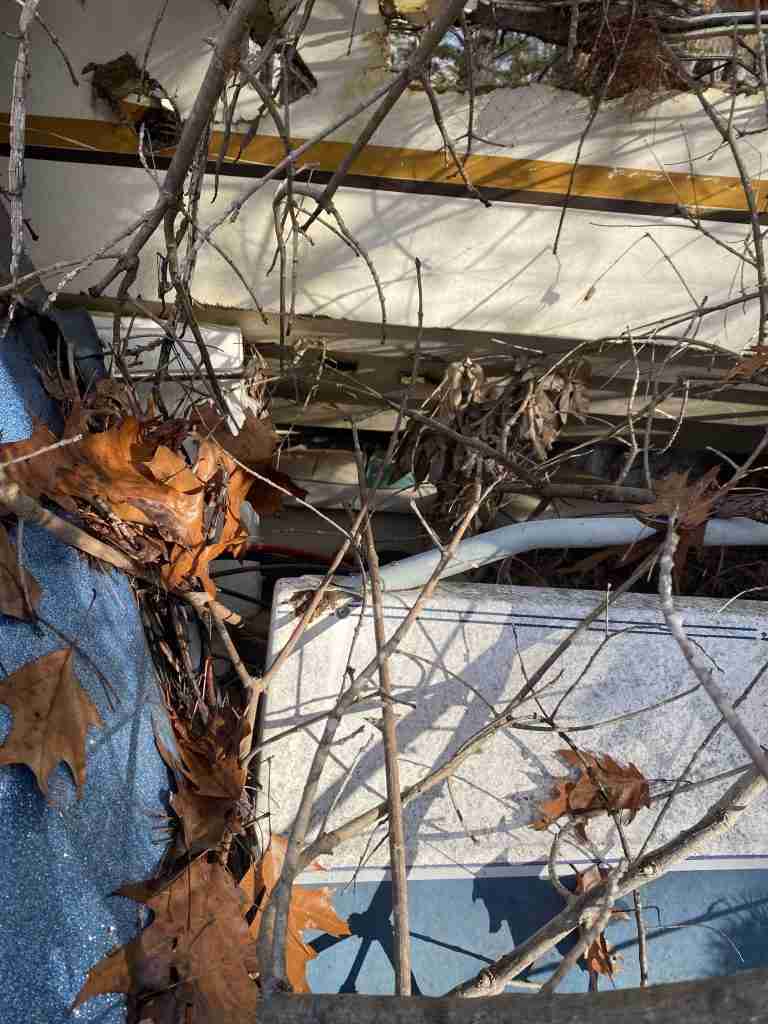 We’ve seen junk. But I don’t know if we’ve seen a pile like this.

At some point in the property’s history there was a boat repair shop. And I guess, when the boats were not repairable, they’d just throw them in the woods. That was our task.

We were brought in to remove a literal “pile of boats” in the woods. Besides the boats, we had to haul off construction debris, organic material (dirt, branches & leaves), trash and an old “Olympic style” trampoline amongst other varied junk.

All and all, here’s what our haul looked like… 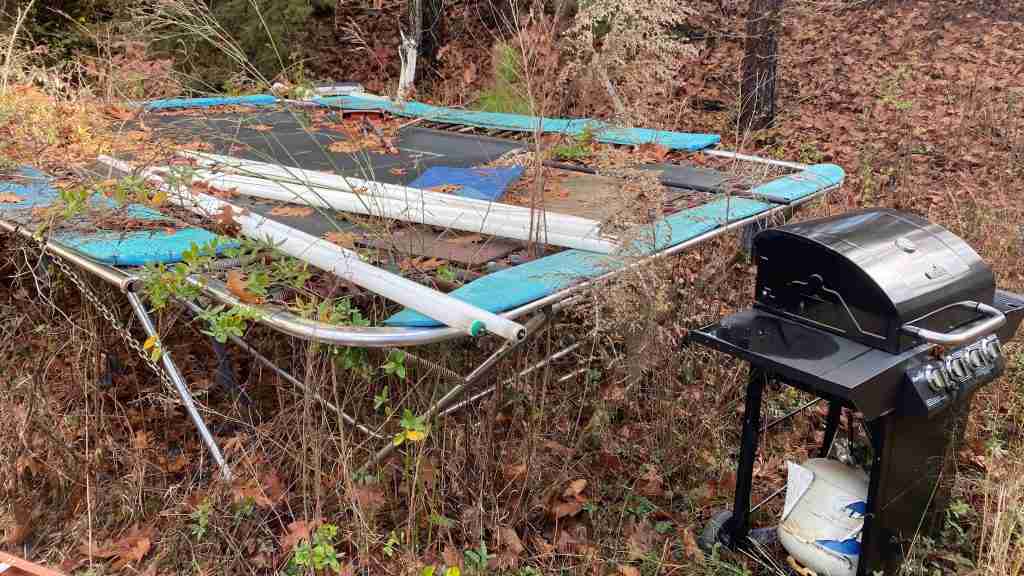 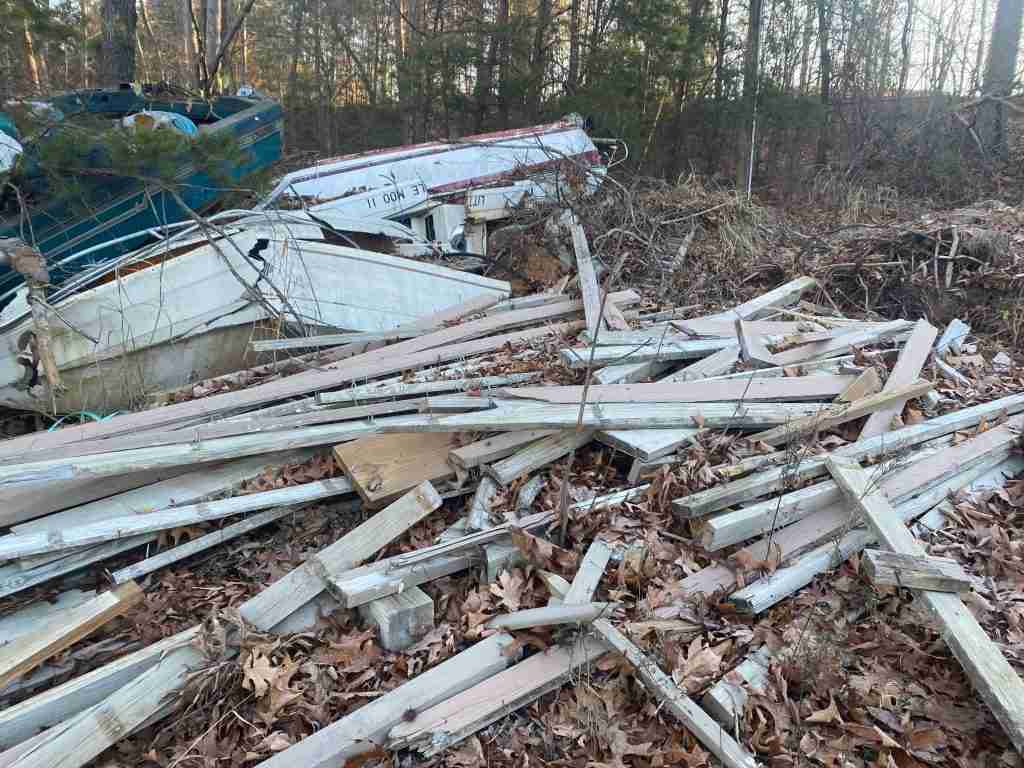 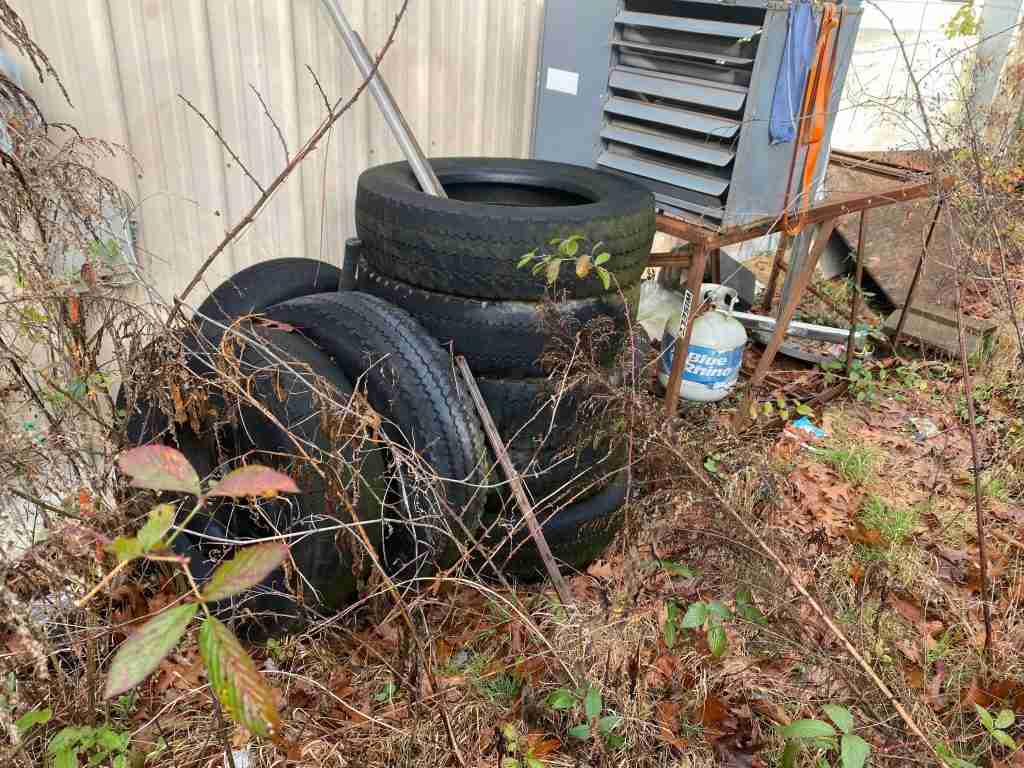 How we did it.

We brought in tools and a network of pros. Our team arrived with Zane, our F-350 Super Duty pickup and a 12 ft. dump trailer. We also brought in two 20 yd dumpsters.

Then, we called our friends at Earth Friendly Recovery who brought an excavator and their own 20 yd. dump trailer.

We first cleared a path for the excavator by hand loading some of the construction debris into our dump trailer and getting it out of the way. With a path cleared, the big machines got to work. We first thought we might be able to pull the boats out whole, load them into the dumpster and crush them with the excavator’s bucket. We quickly realized this was not possible. The pile was too mangled. The boats were too brittle and honestly, the 20 yd dumpsters were too stubby. We also realized the boats were not empty hulls. They still had wiring, fuel tanks and 2 of them still had motors. So, the excavator started chomping away. Bite by bite. In between, loading the organic material into the dump trailers.

Once we had the dumpsters loaded, we even had the Crushr truck come out and flex a bit. The hope was we could make some more room in the dumpster, but the truth was the excavator did a great job of compacting as it went. The excavator was on the clock for 7 hours. By the end of the day, the pile of boats was gone and so was most of the construction debris and organic material.

Some sights from that first day. 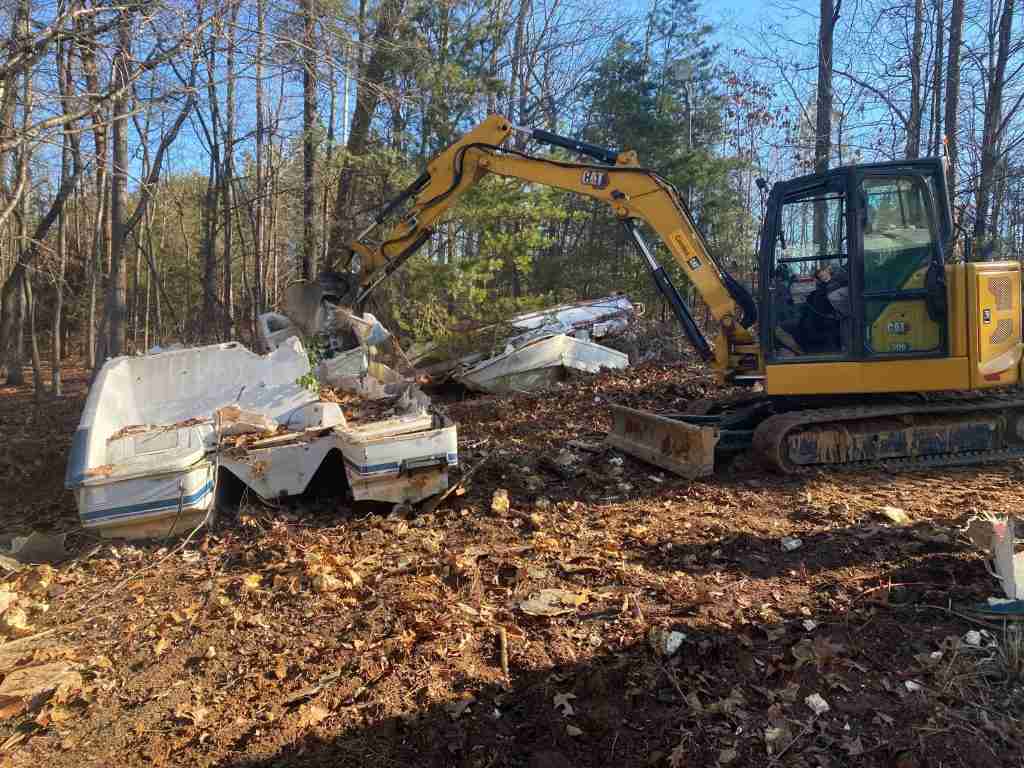 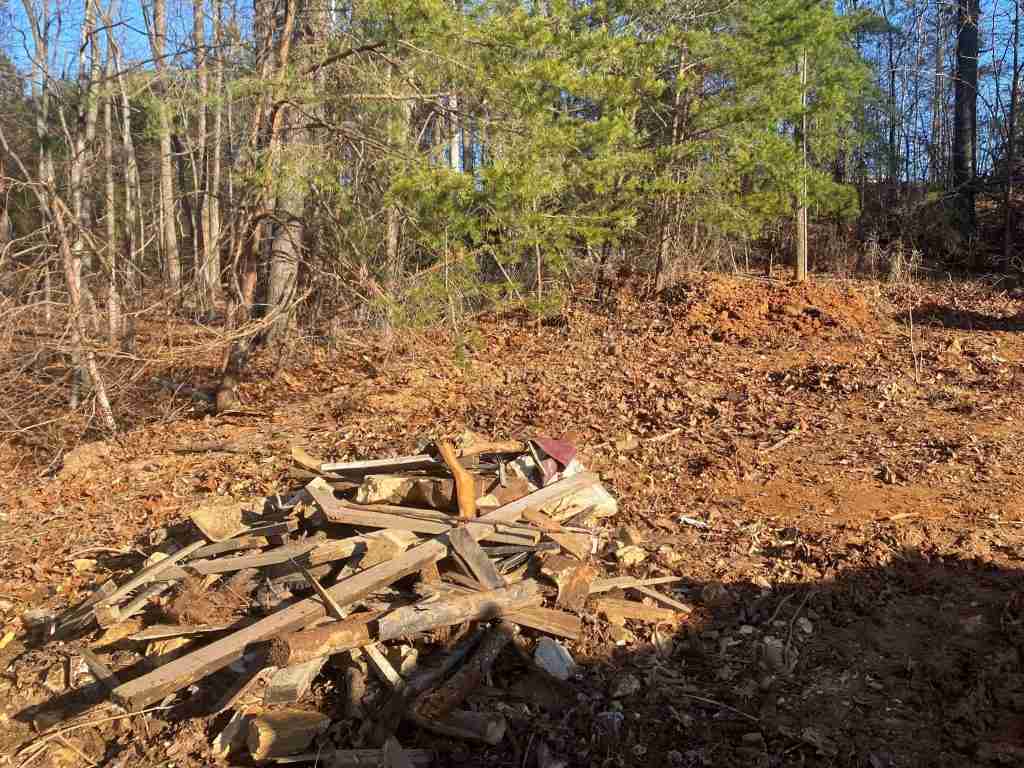 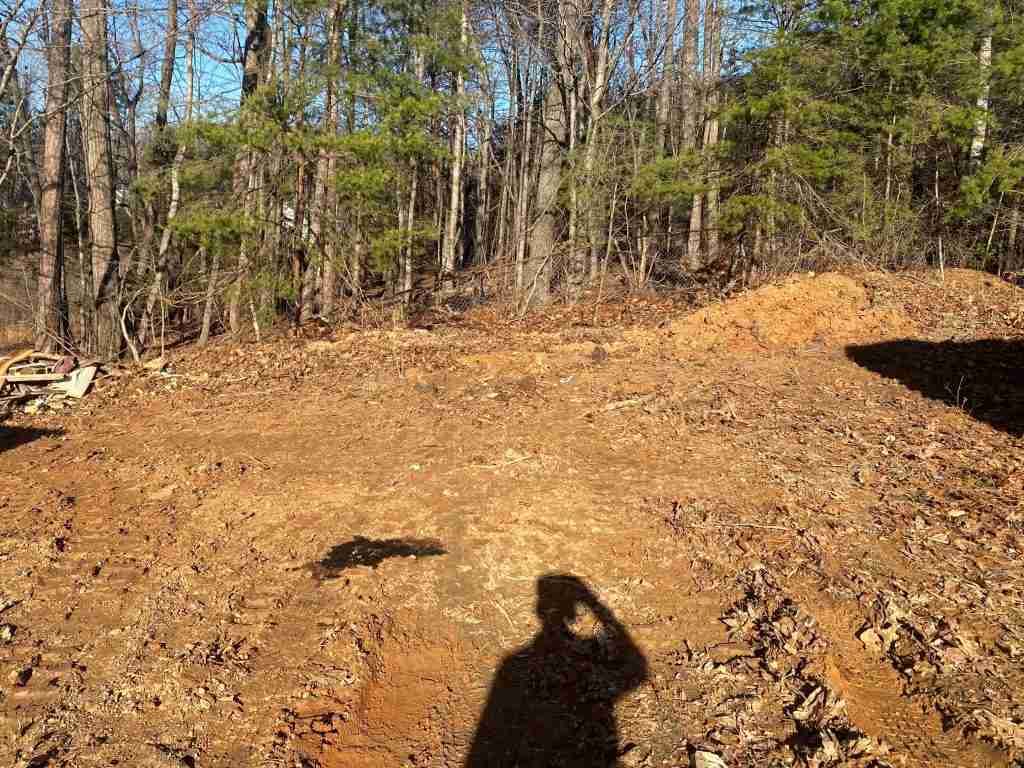 The next day, we were back at work. We finished clearing any remaining debris we couldn’t fit in the dumpsters after day 1. We then started our more traditional junk removal work. We stripped the trampoline, leaving just the metal frame. We gathered all of the random and scattered junk and trash from around the job site and we cleared the storage units. By the end of the day, we made 4 trips to the dump. 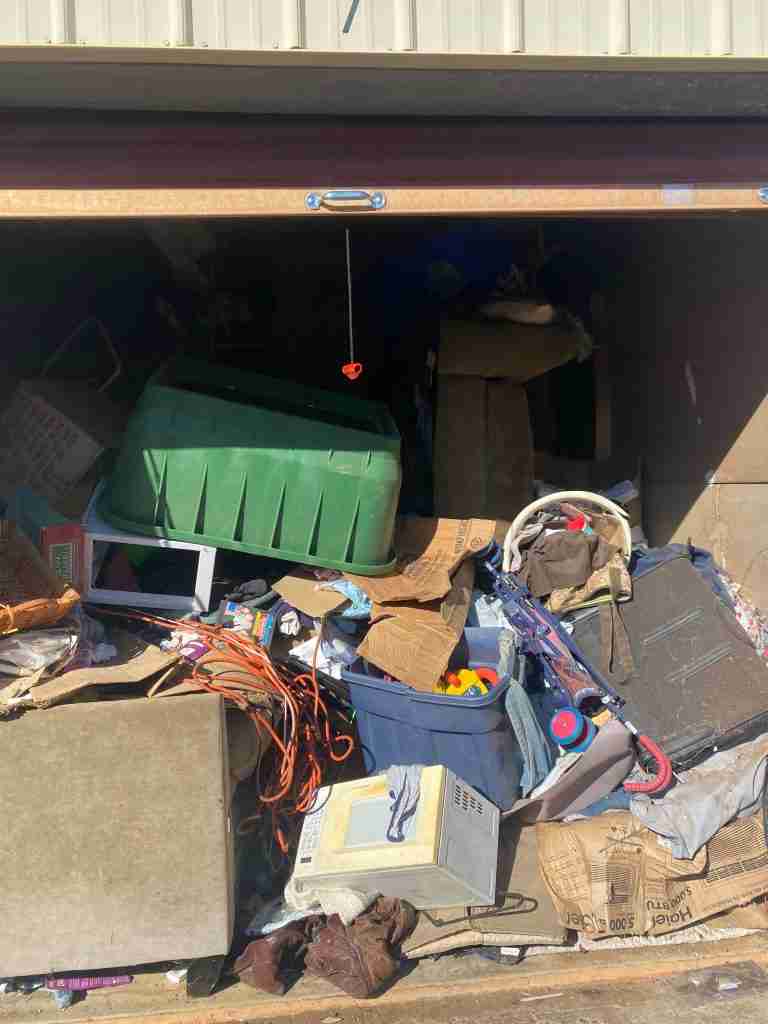 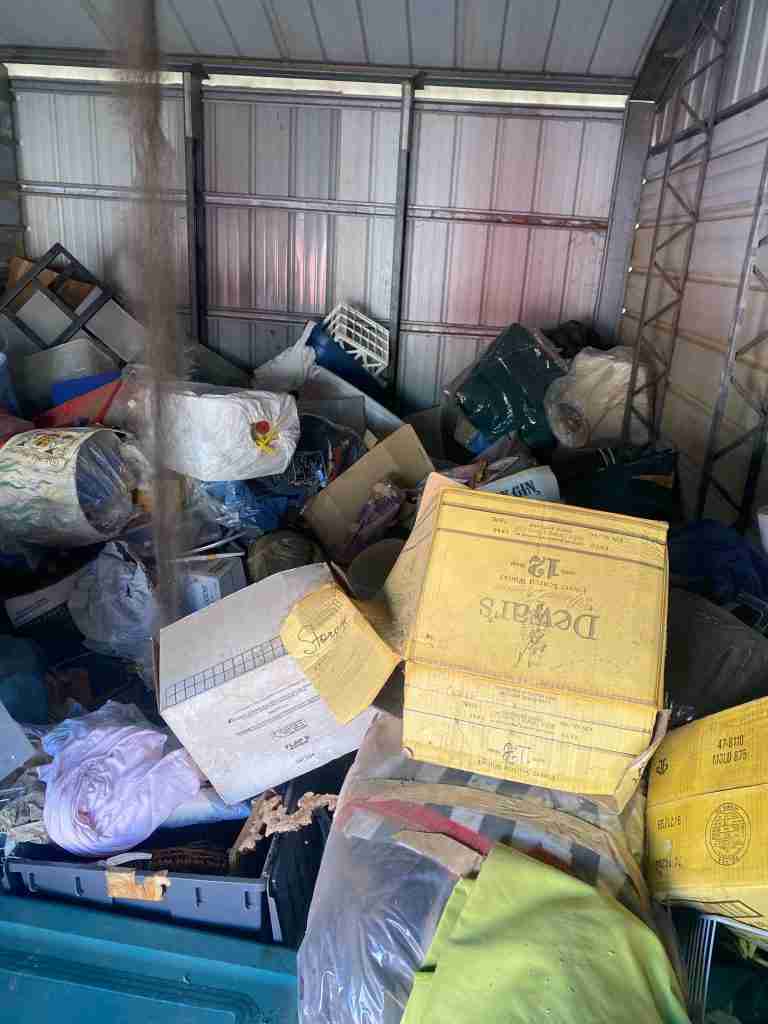 The next day was slightly weather impacted but we kept at it. We made an early morning trip to the recycling center. We properly disposed of the tires, CFL bulbs, car batteries and propane tanks. We had a crew come out and cut up all of the metal including the trampoline and then sent the dump trailer to collect all of the metal.

Our final day on property started with a trip to the scrap yard. We offloaded 2 boat motors and all of the metal we had cut up and collected over the previous 3 days. In total, we delivered 3,120 lbs to recycling.

With an empty trailer we came back to the storage complex and collected the last of the junk. This included the 2 jet skis, a boat canopy that needed to be cut up because a tree grew through it and an 8 ft. chalk board we found buried under the leaf litter. We also got rid of a steel framed shipping box that needed to be cut up and disassembled. But we weren’t finished yet. One item remained. 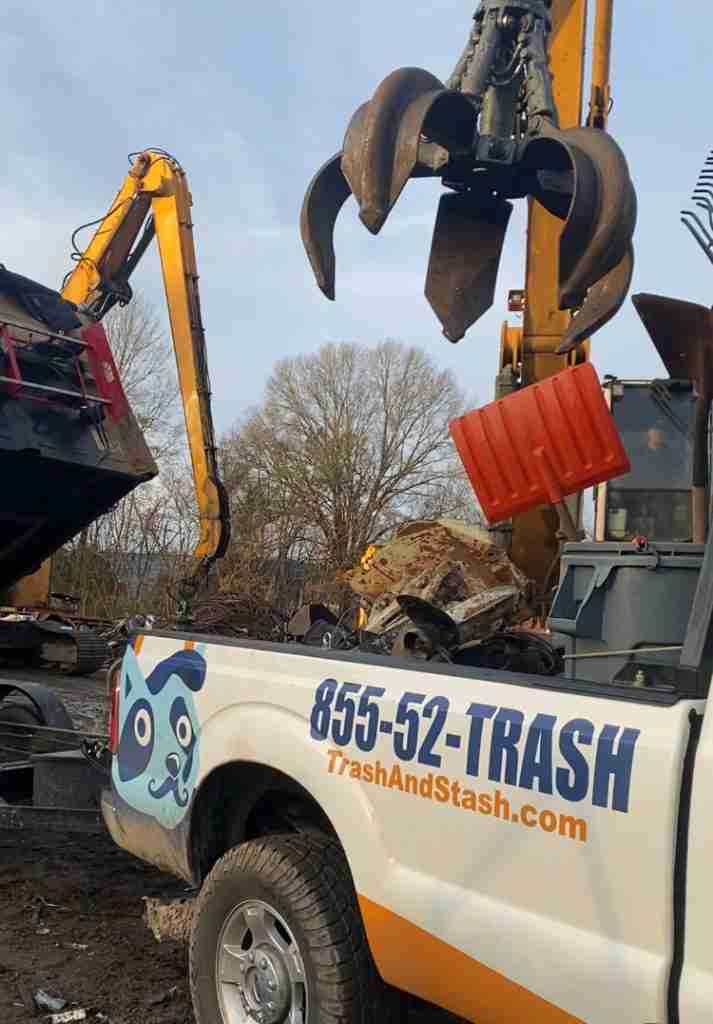 The excavator helped us chew up and dump 6 boats. But there were 7 boats in total for us on the work order. The last was not in the pile. It was down the hill, behind the storage unit. And it was intact, full of mud, water and trash. So, we put a tow rope to work. Here’s what we did. 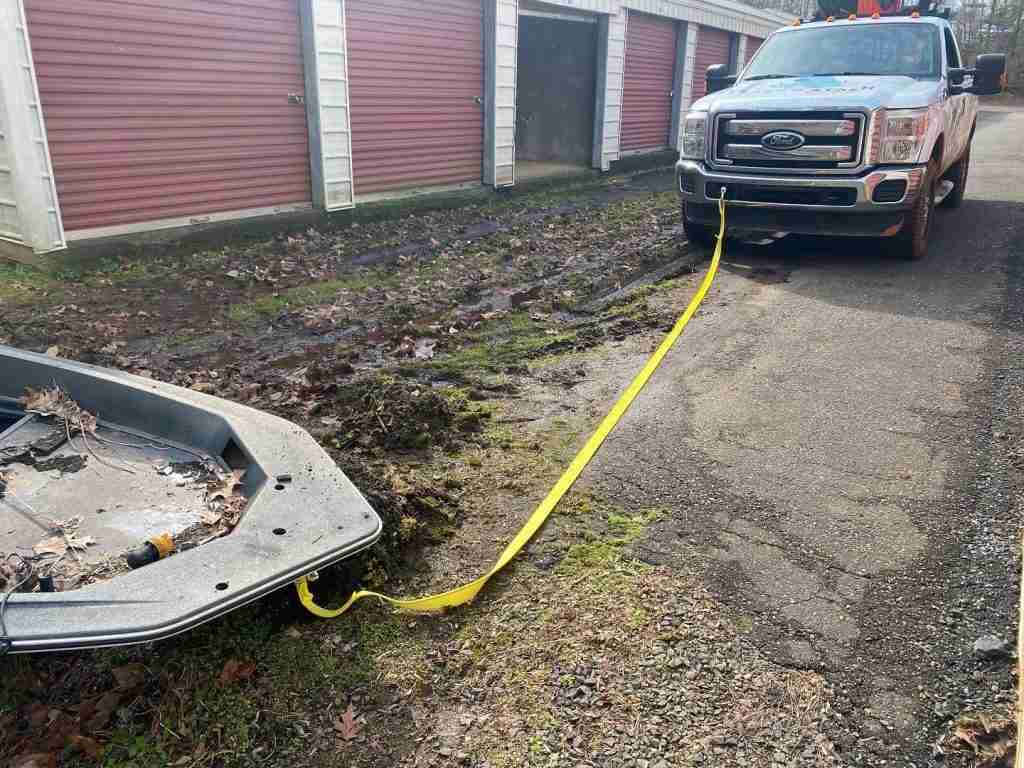 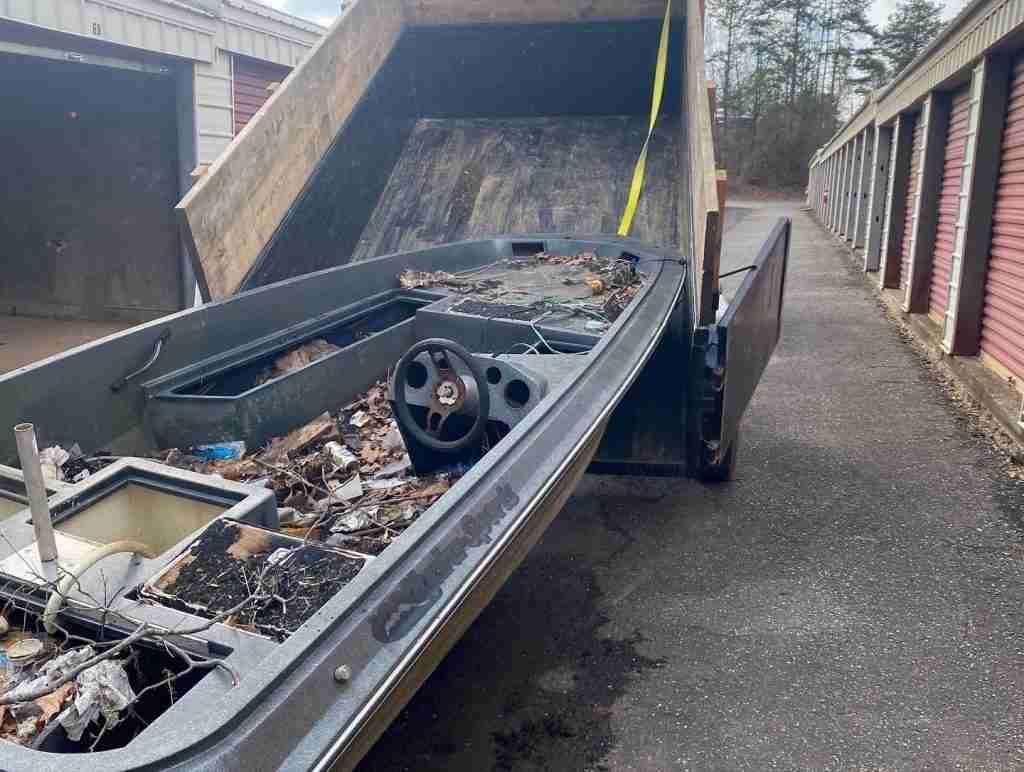 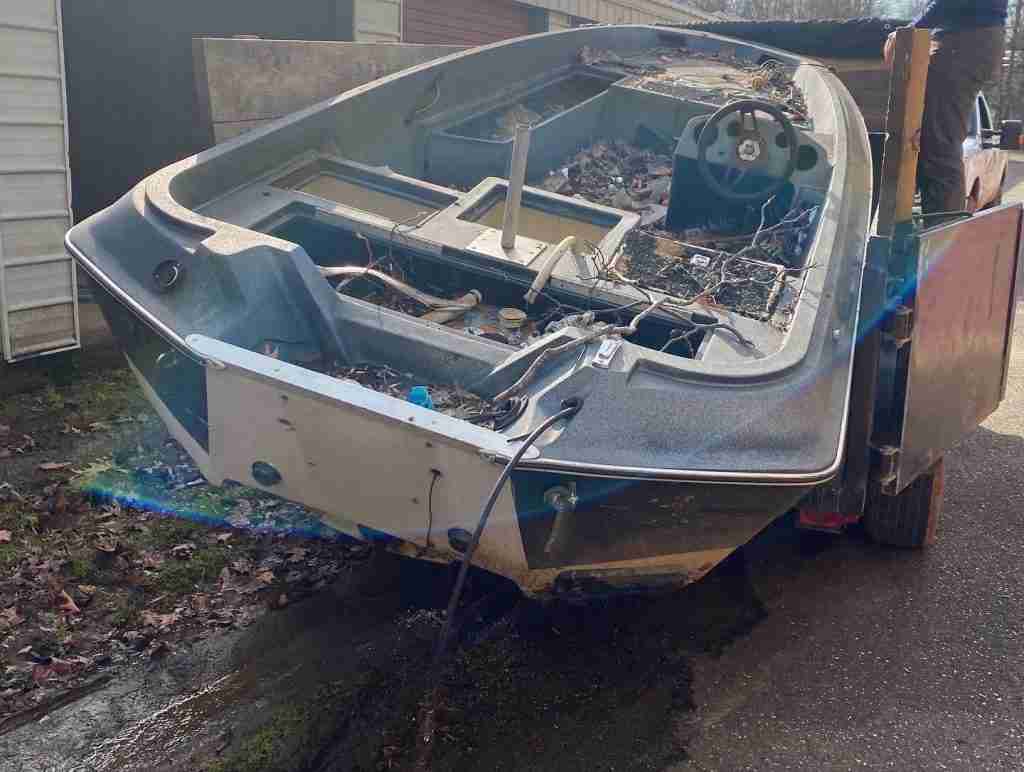 We’ll be back. This is a great a property with lots of potential. As repairs continue and tenants turn over, more storage units will need to be cleaned out. In just 4 days though, we made a world of difference. The owners and property management company is happy. They now have room to work and their tenants have seen marked and immediate improvement.

The final removal tally was: 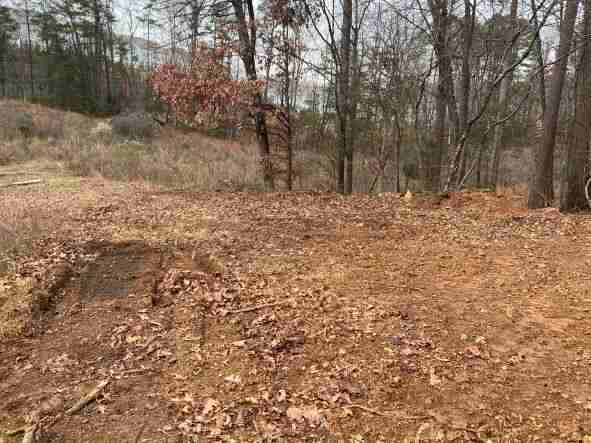 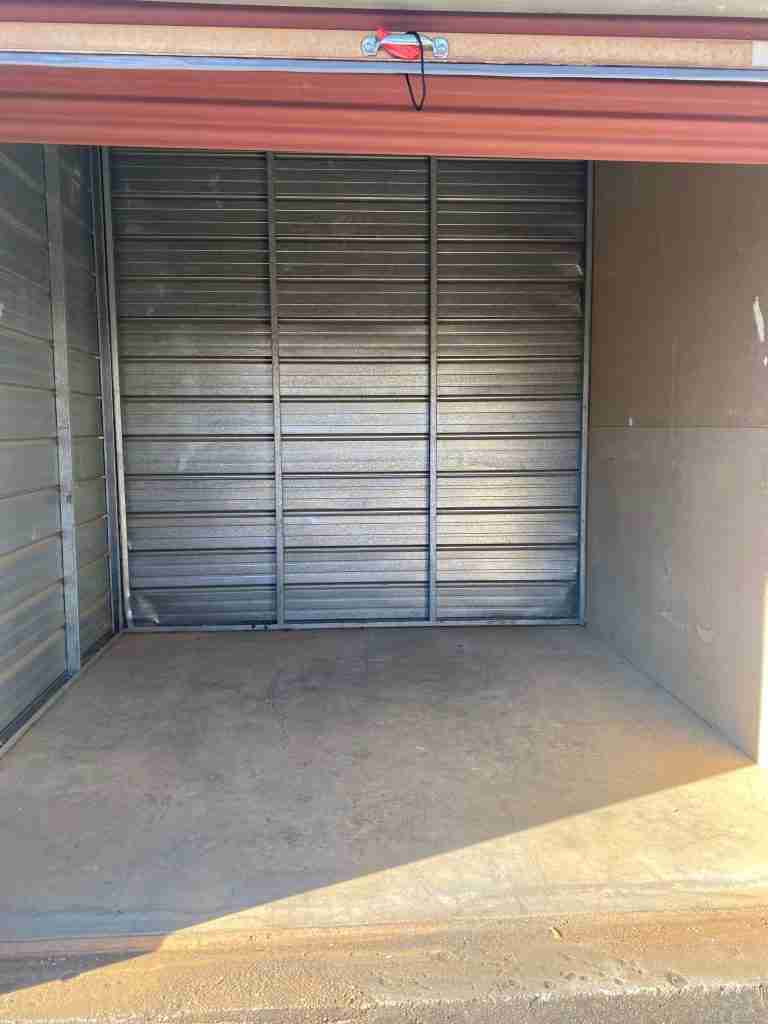 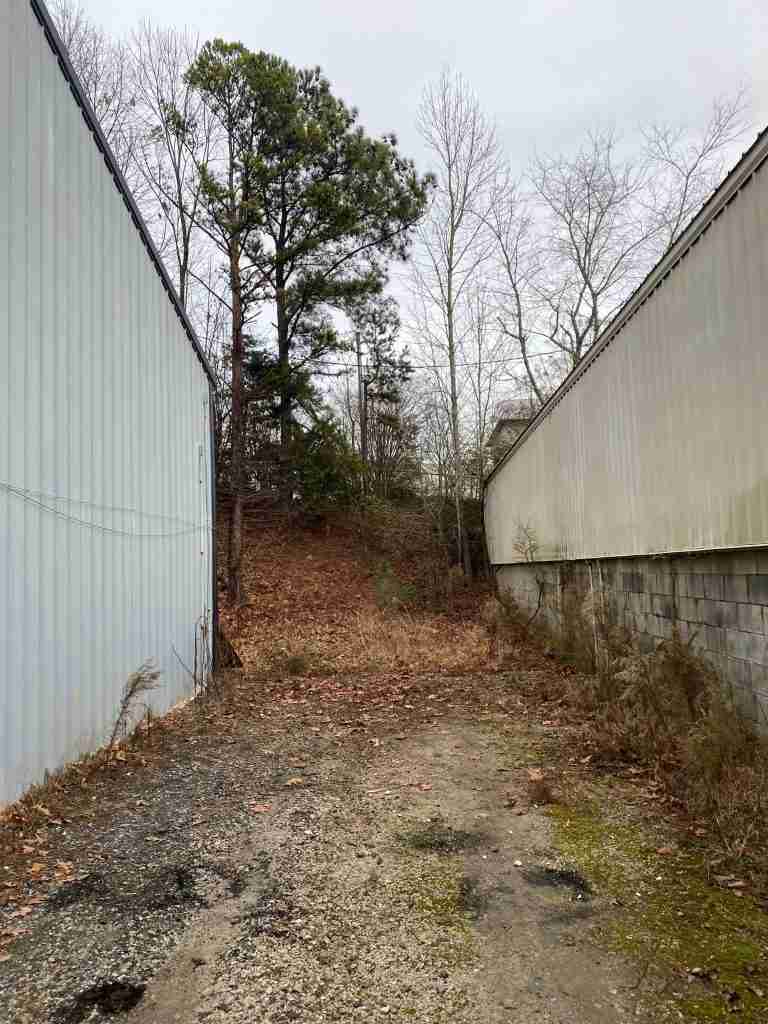 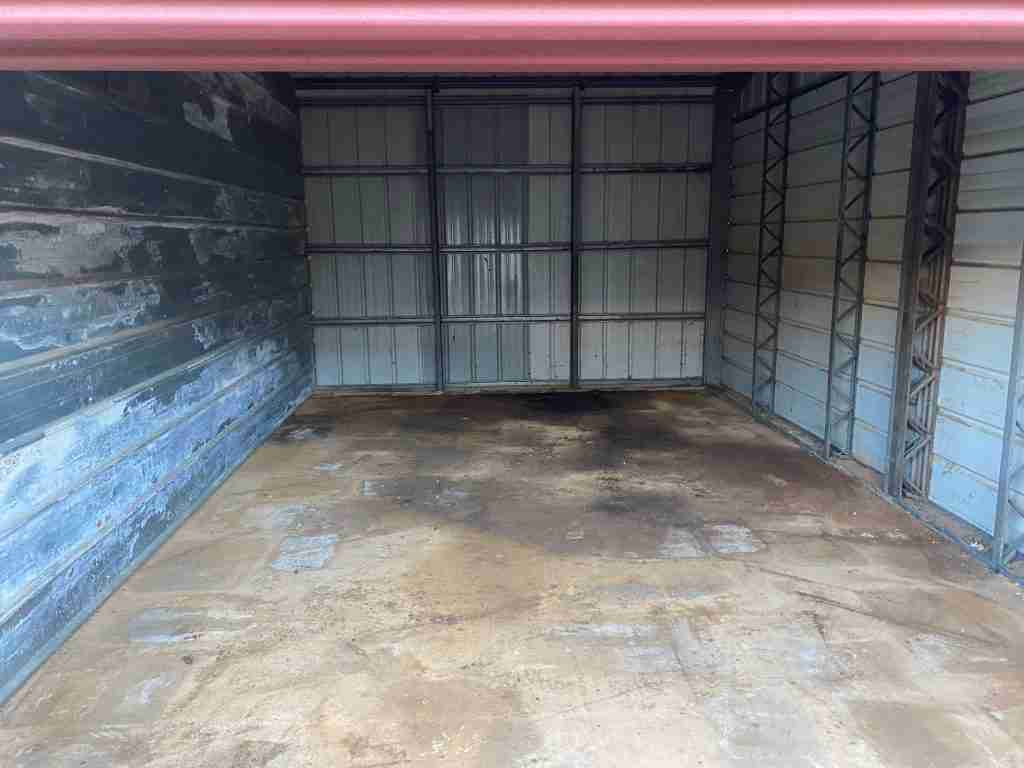 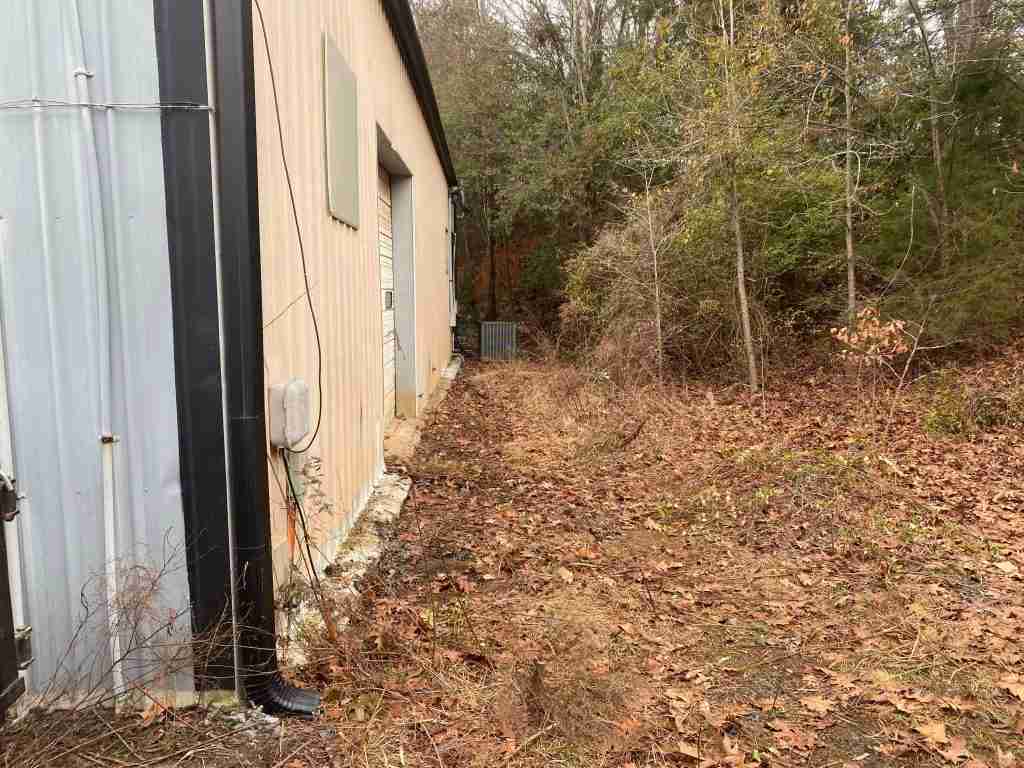 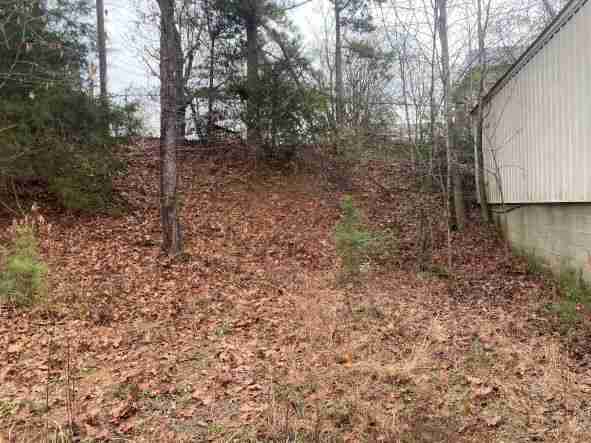 Get 10%* Off junk removal & moving help when you donate $25 or more to the Isabella Santos Foundation. Help increase the survival rate for kids with rare pediatric cancers.
Let's Do It!
Special offer

*Up to $100 discounted from Junk Removal & Moving Help total. 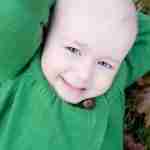 Get 10%* Off junk removal & moving help when you donate $25 or more to the Isabella Santos Foundation. Help increase the survival rate for kids with rare pediatric cancers.

*Up to $100 discounted from Junk Removal & Moving Help total. 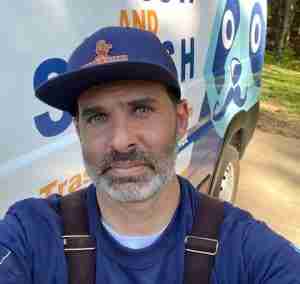 Junk removal was not my first career choice. It was my best choice though. I used to run events for a living. I did that for almost 15 years until a global pandemic launched me into the junk removal business. I’m an expert in operations, team building & creating incredible customer experiences. And... I love helping people simplify their lives.